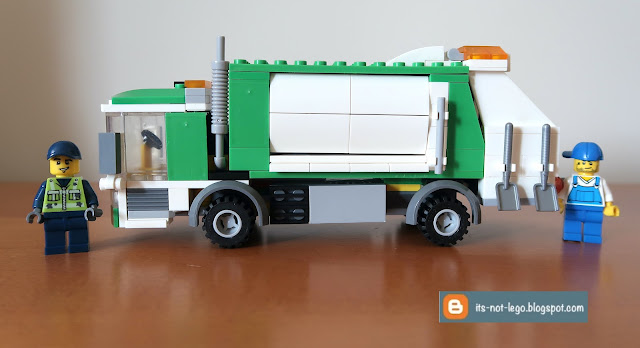 Hi all, welcome back to It's Not Lego, it's time for another not Lego review.  This time we are seeing a knockoff set that more or less copies the Lego Garbage Truck set 4432 that was released in 2012 and retired in 2013.  There are certain elements that are different, so let's take a look at the pictures and compare. The set we are building and reviewing today is by an obscure Chinese brand called Chaobao Renren.  I searched brick4.com and found that they have made 11 building block sets of which 4 are their original design.  The other sets are copies of Lego or MOC sets. The Chaobao Renren Garbage Transfer Truck, as it is called, has different minifigures and accessories that the Lego version.  It has 369 pieces whereas the Lego version has 208 pieces, that's almost a third more pieces, how could that be? Let's take a closer look! My set arrived in the typical white plastic shipping bag.  Here is the set unbagged. Here's the very thin instruction booklet with a total of 10 pages.   Here's the back page of the manual. Here's a sample page from the instructions. You get this large sticker sheet with the garbage truck set.  Have you figured out what those extra brick pieces are?  This set consists of 8 un-numbered bags of parts.  Comes with an orange brick separator and two minifigures. The minifigures are two garbage collectors and they come completely un-assembled.  Note, that these figures are completely different than the Lego garbage guy and girl pictured above.  The Chaobao set comes with two shovels instead of one shovel and one broom. Since the bags are un-numbered, I'm just gonna rip all the bags open and start building. Brick clutch and quality was pretty good. Although the transparent pieces weren't packaged separately, they weren't too badly scratched or scuffed. This set is an easy build and doesn't take too long to finish.  I think anyone over 6 years old could handle building this set, although they probably would need some adult help to assemble the minifigures. Functionally, the Chaobao garbage truck has all the same features as the Lego version, I'd imagine. Lots of play value here. Turning the wheel will raise the platform and empty the garbage bin. More pics of the completed Chaobao garbage truck follow. The original Lego 4432 set comes with two trash cans and some fish for garbage.  In the Chaobao set, it comes with a recycling station, which we also saw in my review of the Sluban M38-B0780 Garbage Truck set.   So instead of garbage, we get 80 1x2 pieces of tile parts to which we affix the stickers.  There are 20 pieces of red, green, gray and blue tiles, respectively.  Each colour coded piece is supposed to teach kids about what can or cannot be recycled.   For this set, I chose not to apply any of the stickers just yet, maybe later.  Anyways, once applied, the tiles are supposed to be sorted into the proper coloured bins, just like the Sluban set. The Chaobao Renren Garbage Truck is now my fourth Garbage/Recycling truck in my building block collection.  The others are:   Mochimaster MOC garbage truck Enlighten 1111 Garbage Truck Sluban M38-780 Recycling Truck Note that this set seems to be very hard to find on the internet.  There's not many on-line retailers carrying this and I only found this store on Aliexpress  that has it.  The price paid is probably a little higher than normal for a bootLego set, but I went ahead and bought it anyways for the rarity of it.  It's still a lot cheaper than if you try to buy the now discontinued Lego 4432 Garbage Truck.  A used set will probably cost you $50 and a new set will probably cost over $100 USD.  Here's a set I found on Amazon.com recently.Please let me know what you thought of this set review.  Would you pay over $100 for an original Lego 4432 set or about one third the price for the Chaobao 5632 set?