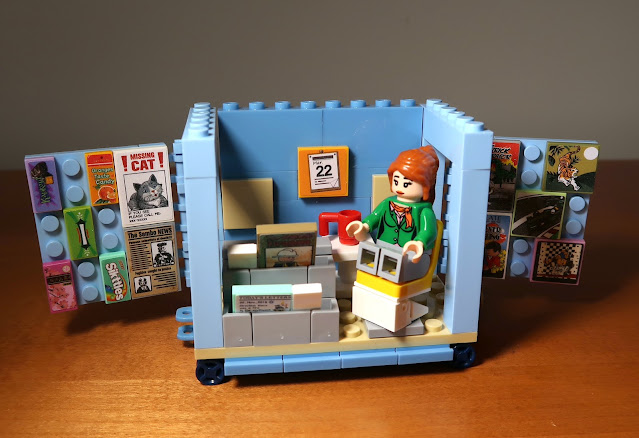 Hey brick fans, I'm back after a bit of a hiatus!I've moved out my house for the next few months until renovations can be completed.  As a result, I haven't been buying as many brick sets as I normally would.  In March and April, I only bought four new sets off Aliexpress.  I got the Leji clone of the boutique hotel, a couple of MOC clones, 60s batmobile and an imperial troop transport.  I'll try to review those soon.In this post, I will be reviewing the Sembo 601111 magazine kiosk or newstand.  Sembo calls the set a newstand, but there aren't a lot of newspapers included.  They look more like magazine covers to me IMO.The set consists of 119 pieces and includes one minifigure.  Here's everything you get in the set:  A two sided instruction sheet, four bags of parts, a couple of plates and a sticker sheet.The mini figure comes completely disassembled, so you have to put it together yourself.Here's how the kiosk lady looks like when assembled.  I guess she's better looking than a crusty old guy.I was hoping that this Sembo set would include printed pieces, but no, I just got a sticker sheet.  On the bright side the stickers aren't skimpy or thin, and they have a sparkly texture to them. They were easy to affix to the tile pieces.  As mentioned previously, the stickers look like magazine covers.  Only one sticker says Sembo news. Some of the other stickers are for products like candy and juice.  I can probably reuse them in my 7-11 store in future.Other than the stickers, this set doesn't use any special pieces, so if you have the spare bricks laying around, I'm sure you can make your own news stand or kiosk from the instructions above.Here's all the pieces after you empty the four bags.  The brick quality is quite good, and I didn't find any scuffs or scratches.  I did find that the brick texture was softer than Lego bricks.  Other than that, no clutch issues and building the set is effortless and could be managed by little kids too.Simple back wall and floor.  Regarding the base, it has little wheels for rolling the kiosk into place.  It also has a bracket that I guess could be used to attach to the back of a vehicle to pull it around.Accessories include a tilting chair and a small table for the coffee mug.After assembling the kiosk frame, it's time to place the stickers!  The chair and table just fit next to the built-in magazine racks.  Not much room for anything else.I tried my best to match up the coloured tiles to the stickers as per the instructions, but I'm sure you could just use whatever you wanted as well.Here are some of the stickers applied to the tiles, then put onto the side panels of the kiosk.Here's the other side of the kiosk wall.  Both walls can fold in for ease of transport, I guess.  Kind of a mixed bag for the stickers, but they do have mini figure characters on them.These are the stickers that go inside the kiosk.Tada, the kiosk is complete!  Well, not quite. I need to put the roof on.On the ceiling you get a ceiling fan and a light.  Good for tending the kiosk on those hot nights.Normally, you would have the side doors open to display the magazines, but here they are folded in and ready for travel.Before hooking up her kiosk, the lady always does a walk around to make sure everything is intact and stuff hasn't fallen off.  Looks like she has given the A-OK.Here are the extra left over parts from the set.  Yours might vary.Here's where I got my set if you are interested.   https://s.click.aliexpress.com/e/_AOEInvThis set is part of a 4 set series, the others are food stalls on wheels, which you might like.  I got my set delivered to Canada in approx 3 weeks.This was a small set that doesn't require too much skill or time, but looks nice by itself or in a Lego style city.  I give it 4.5 stars.  If it had printed tiles instead of stickers, it would have gotten 5 stars.Well, that's it!  Hope you enjoyed this review of the Sembo 601111 News stand.   See you next time!