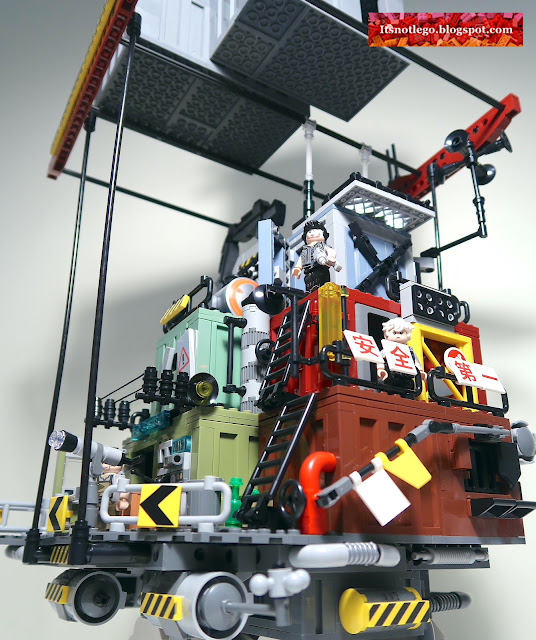 Hey fans of Lego and not Lego!  Welcome back to my blog!   This will be my first post for 2022.   Use discount code ITSNOTLEGO at checkoutI can't wait to show you pictures of my latest not Lego brick build.  It's my third set from the brand called Pantasy.  This one is the Pantasy 81101 Spirit(Ling) Cage: Incarnation set.  Use discount code ITSNOTLEGO at checkoutI bought it from www.brickkk.com during their sale just before Christmas and it arrived in Canada 2 weeks later.   In case you want to buy it, here's the link.  Don't forget to use their coupon to get an extra 12% off the sale price.This building block set is based on a 2019 Chinese science fiction anime series of the same name. I watched the animation and it's stunning.  It depicts a dystopian future where the earth has been ravaged by climate change and the last few citizens live on this giant floating structure called the Lighthouse.  The rich and powerful live on the top side of the Lighthouse and the poor, who are called Dust People, live in cramped container housing suspended underneath the Lighthouse.  The TvTropes.org website probably has the best info about this anime.Apparently Pantasy brand is officially authorised to release the Spirit (Ling) Cage set.  I hope they do more sets from this movie in future.Anyways, enough of me yakking, let's look at the pictures (Warning!  massive picture dump as usual).My set came in a generic box with  all the parts bagged with the Pantasy branding.  Each bag is clearly numbered and associated with the respective section in the user manual.The instruction manual is quite thick with over 226 pages and 398 steps.  Cover art is really nice to look at.The first few pages show you pictures from the set, nicely depicted and stands out against the black background.Unfortunately, all the text is in Chinese, so I couldn't decipher the meaning.There are seven sections to build this set, and this page shows you the breakdown, which is clearly marked.At this point I'm just going to show you the pictures of the completed build.  If you are interested to see more detailed pictures of the set during construction, please check out the second part of this post called Building the Pantasy 81101 Spirit(Ling) Cage set.In the Spirit (Ling) Cage anime/movie, there are dozens of hanging structures suspended underneath the Lighthouse, where the lower class people live.  This block of container structures is a typical live/work dwelling, where the Dust people live in the containers and sleep in bunk beds right next to the machinery they operate.As you can see in the pictures, this set is rich in details.  There's so much going on and no matter which angle you view it from, there's always something interesting that catches your eye.  I really like the colour pallette used, combining sand green, sand blue, brown, tan and burgundy together. Each container home in this set is different from the others and all the interiors are fully furnished inside.  On the outside, there's lots of signage using solely printed parts.  No stickers here!  There's several cylindrical storage tanks attached to the underside of the building platform as well as different pipes giving it a real industrial feel.  There's even what looks like electrical wires and transformers on the side.Just showing you all the different sides of the structure.  The giant girders above the containers would be attached to the underside of the Lighthouse.  I guess that this is how they re-position the hanging buildings.  There are a total of 5 long cables that the entire structure!I imagine that the rooftop crane would be used to hoist heavy machinery and objects from floor to floor.  Makes you wonder how they would add new container homes to the complex.If there's one thing I would improve on this set, it would be to increase the platform size and catwalks so that there's room to walk all the way around the structure.  Although there are ladders to the various levels, they don't seem to be connected.Those white blocks underneath the platform are mean to simulate clouds, I would imagine.The set comes with six minifigures, although similar in appearance and size to Lego minifigures, they aren't compatible because Pantasy uses a different torso.  They use ball joints for the arm connections, plus the waist can swivel.  The head and hair might be interchangeable with Lego minifigs, though.  There's two facial impressions for you to choose from. Having seen the anime, I feel like they could have done a better job on the minifigures.  You can find more info about the characters in my part two post. Here are pics of Mark, Ran Bing, and 4068 from the anime:The hairpiece on Ran Bing is the worst. And too bad they didn't do a minifigure for Fan Di, her outfit and headpiece rocks!  Here's a list of the characters from the show.https://tvtropes.org/pmwiki/pmwiki.php/Characters/LingLongIncarnationI found this little bonus piece in the set which isn't referenced by the instructions.  It features the Pantasy brand and the Spirit Cage Incarnation logo.  How cool is that?Regarding the number of pieces in this set, there's no reference anywhere to be found, but I'll guess there must be around 2000+ pieces though.  I only had 1 missing piece out of the entire set, but I'm not sure if it was a packaging error or me dropping it somewhere, it was a 1x1 nougat round piece. I'll probably just replace it with a different colour.  Brick quality and clutch were very good.Anyways, that's it for part one of this post of the Pantasy Spirit Cage set.For part two of this post, I'll show you the build pics where you can see all of the interior details, plus a breakdown of the parts bags for each section of the build.  Use discount code ITSNOTLEGO at checkoutVisit brickkk.com if you want to see more cool sets like this one.  Don't forget to use the discount code!Please check it out if you like!