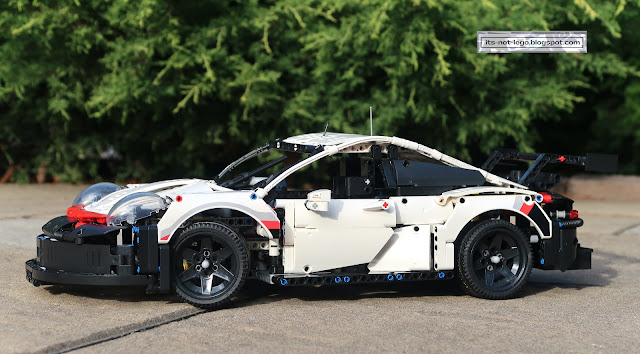 Hey alt Lego fans!  Today I'll be doing a short review of an unbranded copy of the Lego 42096 Porsche 911 RSR set.  This was a really fun technic build, which is a nice change from the sets I normally build.  In fact it's my second technic build ever, the first being the Lego 8273 Off-road truck from 2007.So let's talk more about this alt Lego version.  This thing measures 19" long by 8" wide by 6" inches high which are probably the same dimensions as the OG version.There's no mention of the number of pieces so I'm going to assume that it's roughly the same at 1580 pieces, give or take.I got my set from Youmko.com in late July, but didn't get around to building the set until mid August because I was out of my house due to some home renovations that were happening over the summer months.  But anyways, shipping took about a week from China to Canada which is pretty fast.  Unfortunately, the parcel then languished with Canada Post for a couple of weeks before I could receive it.Here's the set out of the package.  Sorry, I thought I had taken individual pictures of the parts bags, but I think I must have accidentally deleted them.  Anyways, I hope you can make out the bags from the picture above.  Although the bags were un-numbered, they were printed with a generic set number 00911.The alt Lego set comes with two sticker sheets and a condensed version of the manual.  I say condensed because the instruction pages are greatly reduced in size, sometimes making it difficult to make out the proper steps.  I should add that this unbranded set comes with made up brand names.  The stickers say Borsche instead of Porsche and Motll instead of Mobil.  If the stickers were accurate I might have been inclined to apply them to my model, but certainly not as they are.  For those of you wishing to get this set, I would recommend buying legitimate stickers for your Porsche.  Meanwhile, the manual cover, calls this race car a Baosche!Now having said that, don't let the stickers and manual deter you because the build is amazing.  With the exception of one overly tight pin, this set comes together nicely.  The clutch is very good and the gearing is spot on.  The engine camshaft operates the pistons very smoothly.I won't bore you with too many build pics, but I just wanted to show you that this thing is solid and tight, for the most part.  At this point, let me point out some very minor issues, that aren't show stoppers but might give some of you pause to consider.  The headlight covers weren't packaged separately, and as a result have several nicks and scratches on them. The doors don't close tightly.  I understand that this was also an issue with the Lego model as well, if I read correctly.  Unfortunately all of my spare parts are still packed away otherwise I'd probably insert a technic pin into the door to lock them in place.Picture perfect undercarriage.I wish the roof line was just a bit flatter than curved but I think that's a design flaw and not a build flaw per se.  Anyways, enough of my griping, let's get to the pictures.This unbranded set has all the proper workings, just like the Lego version.  It has working suspension on all wheels, steerable front wheels, functional engine connected to the rear wheels, opening side doors and engine bay.  Because I did not apply the stickers, the interior is devoid of the radar screen and map.In my opinion, this set rates an honourable 4.5 out of 5.  It loses points because of the mis-named stickers, the non closing doors and rounded roof-line, otherwise it's a very nice set that looks great and rolls well.  This is one technic set every Porsche fan should have.According to brick4.com, the Lego 42096 Porsche 911 RSR has been cloned and copied by several times and this unbranded 00911 version is just the latest in the series.Get yours today from Youmko.com!  They provide a huge selection of Lego replica sets.  https://youmko.com/products/00911-high-tech-series-super-car-911-rsr-building-blocks-1580pcs-bricks-ship-from-china-compatile-with-20097-42096?DIST=QURBAnd if you are looking for the latest chinese designed building block sets that are not Lego copies, look no further than Barweer.com (who have kindly provided this set for my review.)  All sets include free shipping worldwide and are tax free.As a special itsnotlego discount, you can get 5% off all your purchases at Youmko.com and Barweer.com if you use the code "itsno5%" at checkout.Thanks for looking and see you in my next post!  Bye!