The official LEGO Architecture series since its launch in 2008 with a total of at least 54 sets continues to delight us after over a decade. The latest showcase is the continuation of the skyline series and a revisit to representing the Republic of Singapore with an expanded view of the city since the release of the Marina Bay Sands landmark building showcase. The set was built by Senior Designer Rok Zgalin Kobe and features prominent locations in Singapore from the iconic Marina Bay Sands, OCBC Centre, One Raffles Place, Lau Pa Sat, Gardens by the Bay, Boat Quay and The Fullerton Hotel. With a landmass area of only 710 Km2 (270 sq. miles) and one of the most densely populated countries in the world, Singapore hosts and a wide variety of unique architectures that reflect a spectrum of modern and century-old buildings. The 21057 Republic of Singapore LEGO Architecture comes with 827 pieces and will be available on January 1st 2022.

The LEGO Group provided The Brothers Brick with an early copy of this set for review. Providing TBB with products for review guarantees neither coverage nor positive reviews.
Singapore is one of 3 city-states in the world. It has its appeal as a business hub and a city that never sleeps, is clean, green and one of the safest cities to live in the world. It’s an extremely connected country that has direct international flights to (almost) any major city in the world. The LEGO Architecture series is a theme that has a unique appeal to the residents of a given country and for travellers who have visited the location.
The unboxing experience
The Architecture series always had a serious undertone in terms of box design with the plain colours and dark backgrounds. This is the second set in the series to be released in the new theme layout, after the Taj Mahal in adapting to the new brick motif template at the bottom. The light blue scheme matches the colour in parts of the building windows and brings it a bit more life and colour to the muted undertones of the previous designs. With the part count, age and set number now as part of the templated design, the designers have free play to inject a bit more designer fonts to adapt to the theme, in this case, a slightly more creative font rather than the standard block-ish looking text.

The top of the box is decorated with the outline of the skyline in bricks and a quote from the designer. The back covers an overview of the seven locations featured with photographs of the actual location by which it’s inspired.


There was a hint of disappointment when I realised that the box has now been redesigned as a perforated push tab which will surely ruin the box it was to be opened as intended. For the more serious collectors, the ol’ sharp blade ninja slice the glue bits trick will do. I do stress the need to have a very sharp blade and a lot of patience. LEGO Architecture sets have always had a premium box feel, just like the LEGO Ideas sets which had proper box flaps that allowed the sets to be taken apart and stored properly. It’s quite safe to assume that this will be a thing of the past and we can look forwards to more push tab boxes.


Five bags and the instruction manual are packed snugly within the box. I did notice that while typically bags in any given LEGO box are randomly shoved into the box, this particular set that I received had everything neatly stacked and arranged leaving the crisp plastic bags almost in pristine condition.


The instruction booklet has a slightly thicker cover and back while the pages with a high gloss finish.

The first few pages turn to feature snippets and facts of the selected locations featured in Singapore.

The build experience
The base platform is uniquely shaped as opposed to the very familiar squared-off perimeter line when featuring a single building.

The flat placement of the base is nothing unusual yet a few unique pieces placed in the upper right corner left me curious about what’s to come. I’m calling out  specifically at the 1×1 Round Plate with a horizontal shaft , and the round plate with the bar handle. The rounded 1×2 plates are strategically used to hold the shafts at a 45-degree angle. One can be quite used to simple technics being used for angled buildings, but these new approaches create an interesting build experience for architecture fans.
The plate is then levelled with various grey and green tiles and plates to provide the concrete base but leaving a single line of alternating blue hues with transparent tiles to recreate the Singapore River.

Printed Parts
This set will be unique indeed and something that fans will treasure with these printed textures to represent the facade of the buildings. The 3×2 tan bricks and the 1×2 are the parts that left me with some concern as the printed boxes do not seem symmetrical. Although the offset may be visually negligible here, it can and will affect the visual tiling alignment of these parts especially when placed side by side to represent a taller structure. A quick glance at the 1×2 white brick at the top right shows that the print rolls off to the left edge, whereas the other piece at the bottom right does not print to the edge, and yet still not centred. Less obvious are the square prints on of the tan tiles.

OCBC Centre
The Overseas-Chinese Banking Corporation Centre (OCBC) is a 52 storey building designed by I.M. Pei has a unique build approach which instead of the typical stacking, is built using a sideways approach. The innards shown below give a sense of the different approaches taken to achieve the curved sides of the structure. Two clips at the bottom of the build will eventually hold it in place on the platform built earlier.

The facade is complete once the printed plates are in place. The square-shaped windows and protruding button-like effect in the actual building led to it being known as the Calculator building in Singapore.

Boat Quay
The 1×1 plates stacked with the 1×1 slope and double slope represent the various buildings at upstream of the Singapore River as depicted by the transparent blue tiles. The printed squares are perfect to represent the entrance and doors or windows of the structures.

The Fullerton Hotel and Lau Pa Sat
The Fullerton Hotel is put together with the 1×1 plates and the 1×2 printed bricks. Lau Pa Sat is built in a hexagonal structural shape with the modified 2×2 facet tiles. The construct of these two buildings is uneventful. The Fullerton Hotel is ranked as a five-star luxury hotel today but was once the General Post Office and even a makeshift hospital during World War II. The LEGO representation for such a landmark monument is underwhelming and yet understandably at this scale, there is simply no way to capture the desired details. From an aerial view Lau Pa Sat, somewhat accurately shaped, but once again, the detailing is left to be desired. In 1824 when it first opened, it served as a fish market. Today it hosts a wide variety of food stalls with a large variety of local cuisine to tickle your tastebuds and fill your belly. Not many would argue, and some even stand proudly to say that eating is a national past-time in Singapore. Lau Pa Sat is one place to visit in the city centre that’s close to all the other featured architectures while enjoying a hearty meal.

One Raffles Place
The white building with frosted windows hosting commercial offices is built using a different yet same approach of a sideways built. Similar to the OCBC Tower, two clips at the underside of the building holds it in place on the platform. One Raffles Place at 60 storeys and over 280 meters tall and situated in the heart of Singapore’s commercial district. It was the once tallest building outside of the United States when it was first built in 1986.


The clips slot into the round plate with the bar handle and stay secured and firm.

An unmarked building in white at the far right utilising the same 1×2 printed bricks for the Fullerton Hotel stands behind the shophouses at Boat Quay. This building is home to The Riverwalk private Apartments built in 1985. It stands about 103m tall and serves as a backdrop and silhouette to Boat Quay and is not called out specifically in any literature in this set.

Photo Credit: William Lum
Marina Bay Sands
The highlight of the skyline is none other than the Marina Bay Sands resort owned by the Las Vegas Sands Corporation. The construct of the 3 towers is highlighted by the transparent blue tiles.


The build is constructed in a sandwiched approach with a selected piece of choice used to support the inner columns. The tower hosts two blasters at the top and bottom. It’s placed at a 45-degree angle to potentially strengthen the plates from having too much sideways misalignment. Once the two pieces come together.

Slightly repetitive, the three towers share a similar construct with 1×2 grilled tiles at the back facade.

The top of the tower features 3 segments angled to fit the curve of the rebuilding. The blue bits represent the infinity swimming pool at the edge of the platform lengthwise.

While the hub-caps representation of the Gardens is a clever approach, it represents a structure that’s hard to imagine without any context if one has not visited Singapore. The actual imagery below depicts the actual Supertrees at Gardens by the Bay.
Photo Credit: Tan Sok Leng
The completed build
The completed build is a colourful skyline is that should appeal to not only the masses but especially for LEGO fans in Singapore and LEGO Architecture aficionados.

The back facade of the set isn’t fantastic, but it’s clean and presentable.

The imperfections
The printed parts do show some misalignment if you are extremely particular and seek absolute perfection.
The alignment also affects the printed tiles on the OCBC Centre. If you squint your eyes a little, you’ll notice a faint line separating the bottom windows (on the left) whereas the panels on the right, line up perfectly. There’s some visual testing and swapping of printed tiles needed for me to get this looking decently. I suspect depending on the prints you have, you may or may not have these same challenges.


One frequent comment that I received from local Singaporeans and residents were about the particularity of the arrangements. Why are the Gardens of the bay placed in front of the Marina Bay Sands building? While in general, the other builds showcased are spread out across the city centre, in actuality, the Gardens by the Bay and the Marina Bay Sands are practically next to each other (separated by an expressway) and the gardens are located behind Marina Bay Sands and not in front as the LEGO representation. Not a deal-breaker but just feels odd if you’re familiar with the geography. 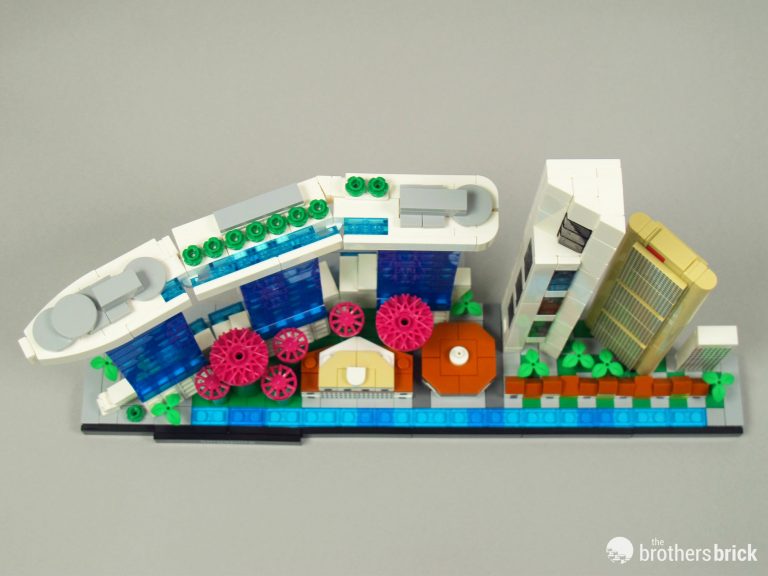