Last year, LEGO Ideas celebrated 10 years since the first fan idea became an official retail set. Who could have imagined the number of universes, places, and characters turned into official products since then? And now, one more idea joins the club — LEGO Ideas 21316 The Flintstones , a fan project by Andrew Clark , who is known among LEGO enthusiasts as the fan designer of another LEGO Ideas set, 21304 Doctor Who . With 748 pieces, the Flintstones set is much bigger than Andrew’s previous project. It will be available to LEGO VIPs starting on Wednesday, February 20th for US $59.99 | UK £54.99 | CA $79.99.


The box and its contents
Like most LEGO Ideas and Architecture sets, the box is sturdy and easy to open in order to minimize wear. Even though the face of the box is exactly what you would expect, its bright yellow sides look very attractive and should stand out on store shelves.

Another point worth mentioning about the box is its dimensions. It is amazingly thick and feels much heavier than you might expect for a set of this size. The reason for this is likely due to the box’s secondary purpose; it can easily fit the assembled set in its entirety, making for the perfect storage solution when not on display.

Six bags inside the box leave almost no spare room and the instruction book, which is printed on premium-quality paper, accounts for a significant proportion of the product’s weight.

The instructions include several pages devoted to Andrew Clark, LEGO designers Ricardo Silva and Crystal Fontan, and, of course, the residents of the Bedrock. This section of the instructions is very special for the Brothers Brick team, as Andrew names our website among his favorite LEGO-themed web pages!

Fun fact: the list of parts at the very end of the instructions has the element 6005755 listed twice. If this minor mistake is corrected with the next run of the set, you’d better grab it right now to get this booklet for your LEGO collection!

Unusual and interesting pieces
Despite the fact that the set introduces a new LEGO universe with the Flintstones (unless you count the level in the LEGO Universe video game), it features a surprisingly small number of unusual or new parts. While the minifigures and printed pieces are unique to this set, you won’t find any new designs or recolored pieces.
Still, there are a few noteworthy elements we can point out. Before this Ideas set, Cylinder half 2x4x4 in tan only appeared in two Harry Potter sets. With four of these pieces in the Flintstones set, castle fans can build more tan towers.

Then there are the printed tiles. Despite being colorful and fun, their use outside the set is somewhat limited. It’s a shame that the pattern on the printed saber-tooth tiger tiles do not align when placed side by side. Otherwise, they could prove useful for custom LEGO interiors.


Technically speaking, the only new element is a cloth piece that is used as the roof for Fred’s car (Element ID 6266291).

Minifigures
The minifigures — Fred Flintstone, Wilma Flintstone, Betty Rubble and Barney Rubble — are both one of the best and worst parts of the set. Although many fans of the cartoon will get the set for the characters, I would call their designs highly controversial. When something as iconic as the LEGO minifigure is blended with something equally iconic as the appearance of the Flintstones and Rubbles, fans will often consider the results to be either epic or disappointing.

Even though I find all the figures adorable and charming, it seems the characters’ faces lost their classic cartoonish look during the conversion into LEGO minifigures. The first point of contention for me is a huge empty spot in the very center of the Fred’s face where his huge nose is supposed to be. Even though I know modern LEGO figures do not typically feature noses, the face print feels unfinished.

I would love to call Barney’s look the best of all four, but here’s another problem: he is the same height as the rest of the figures. Barney is supposed to be short, and the difference between his and Betty’s height has always been one of the funniest gags of the cartoon. Even Andrew’s original idea proposed short legs for Barney.

Unlike Fred and Barney, Wilma and Betty have an extra facial expression on the reverse sides of their heads. These designs look very expressive and cartoonish, but here comes another point of criticism: the male minifigures are in desperate need of additional faces. There is not a single episode in which Fred won’t lose his temper in another silly argument. Without an additional angry facial expression, a huge part of his character is lost in translation between the TV series and the LEGO set.

I was absolutely confused when I realized I could never recreate a scene of Fred pounding on the front door and yelling “Wilma!” because he is always smiling!

Those criticisms aside, the design of the figures’ torsos and legs look absolutely fantastic. You might not be sold on those faces, but at least you can always put a classic prehistoric outfit on any of your favorite minifigures!

Assembling the set
It took me exactly four episodes of The Flintstones to build the set. The building process is largely enjoyable, with as few major challenges as possible.
Everything starts with Fred’s car. This iconic cartoon vehicle requires just a handful of pieces and seems to be just as simple as the “real” one. Thanks to bulky Technic pieces and huge wheels, the assembled model feels quite massive.

Once completed, it looks funny and is surprisingly playable. I had to take a short break from building to play with it around the house.

As soon as the figures are all seated inside, the car looks like a stand-alone set.

A gigantic slab of dinosaur ribs is also here, and the LEGO version is just as laughable and silly as the one from the show. They sit on the edge of a 1×4 plate, which, in turn, sits on the very edge of the car. Almost every single time I was moving the car around the table I accidentally hit the ribs leaving Fred without his late night meal. Was he angry? I don’t know; he is always smiling…

The pieces for the house are equally distributed between five bags. My overall impression of this set was that it felt easier to build than many other LEGO products. The reason for this might be the target audience of the set — adults who haven’t touched LEGO bricks since their childhood.
The house itself consists of three plain walls with a couple of windows and a door. Thinking about it now, it seemed much smaller than I expected, but the idea of building stones out of bricks is very amusing. The biggest problem for an inexperienced builder might be the huge number of light bluish grey pieces, but mistakes should be easily avoided as long as you remain attentive.

My favorite part of the house is its chimney. Its core looks like something we all used to build at the age of 5 when colors didn’t matter. Long plates with stone patterns look stunning in this scale. Moreover, take note of how the chimney is attached to the house’s wall. It sits on two Technic pins, allowing for easy disassembly of the model when it has to be stored in the box.

It’s only after bag number five that the empty house slowly fills with furniture and accessories. Among the interior appointments are a stone TV set, massive white sofa, and small round table with one of Wilma’s primary means of communication — a telephone made of a white croissant piece.


The massive roof is yet another pleasant discovery. Not only is it both sturdy and smooth, but the way it is attached to the house is also oddly satisfying. In fact, you won’t find any studs, pins, or clips holding it in place. The roof simply rests upon the walls and is slightly fixed to the structure with a couple of brackets near the chimney. No wonder the design team names the roof among the biggest challenges of the production process.


Last but not least is the little mailbox. It’s a really nice touch, but the letter inside it is a regular 1×2 tile in white with a letter pattern. I wish they included one printed on a grey tile, as paper did not exist in the age of the Flintstones…

The finished model
With the roof in place the house looks amazingly cozy and sweet. Of course, the “real” house as it’s seen in the series stands much more spacious and roomy, but the LEGO version is charming in its own way.


Once the mailbox is finished, it’s time to place the characters inside the house.

I like the house’s folding structure. It consists of three sections, with each representing a particular scene from the series. But here’s the problem: there are only three locations inside the house. Despite being a massive model, the house has little room for recreating the most famous scenes from the episodes.

Within minutes you’ll find yourself wondering if there are any other functions or features to explore, but no — you’ve already tried out all of them. Basically, the characters can either watch TV, use a telephone, or play bowling. I have nothing against these activities, but the set leaves an impression of a very, very limited playground for a series with so many stories.

In this respect, the set reminds me of another LEGO Ideas set based on a TV series, 21302 The Big Bang Theory . Even though the Flintstones set offers a better-looking dwelling, the Big Bang Theory set opens up the possibilities for more play scenarios by including all the main characters. I wish the Flintstones came with minifigure versions of their children and pets. Even if the price had been higher, the set would have felt truly complete.

Final thoughts and recommendations
You may not be the biggest fan of space rockets, a certain TV show, or movie, but this is what I love about LEGO Ideas sets the most — they always surprise you with something you would never expect to see on store shelves. However, I felt LEGO Ideas 21316 The Flintstones was going to make me want to re-watch the best episodes of the show and find a place in my room to have the set on display, but that magic didn’t happen. It feels like I only have half of the set I was expecting to get, which makes me feel a little sad. Don’t get me wrong; everything included in the box looks awesome and even made me “yabba dabba doo!” here and there, but every time I want to recreate a certain scene or take a particular picture I can’t help but notice the set’s limitations: a lack of characters, a lack of extra facial expressions, and a lack of free space inside the house.

The set is aimed at those who love The Flintstones , are fans of new minifigures, or enjoy collecting LEGO versions of vehicles from popular culture. If you don’t fall into any of these categories you might want to choose another LEGO Ideas set, especially when two more sets are on the horizon.

The LEGO Group sent The Brothers Brick a copy of this set for review. Providing TBB with products for review guarantees neither coverage nor positive reviews. 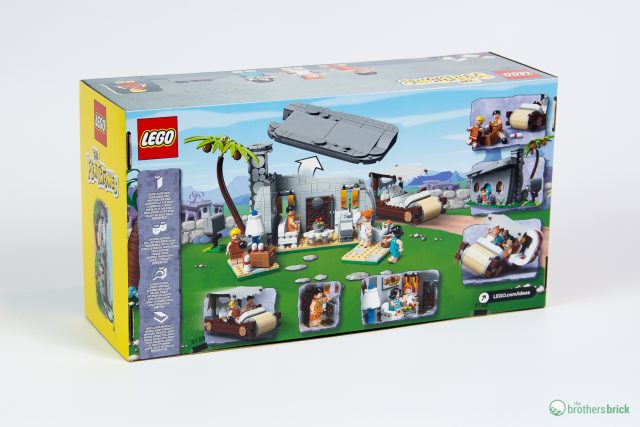