The all-American muscle car comes with working steering, dark blue exterior with white racing stripes, bonnet scoop, a printed Mustang tile for the front grille, GT emblems, and five-spoke rims. Thanks to LEGO we’ve already got our hands on the set, so be sure to check out our full, in-depth review .


The Ford Mustang will be the eighth vehicle in the LEGO Creator Expert line-up. Interestingly, the annual car release has typically happened in August (true with the past five vehicles at least) though this year LEGO is getting a jump start releasing the Mustang in March..


The built set measures over a foot long (34cm) and comes with several different license plate options as well as a variety of sub-assemblies that can be used to customize the base car.

The dark blue pony car sports a white racing stripe down the middle and a tan interior. Dark blue must be the color of the season with several new (and huge) sets being released in that color over the next few months, including the Rexcelsior from The Lego Movie 2 . The color also hearkens back to the first LEGO Creator Expert car ever released, the 10187 Volkswagen Beetle .

The model also has a functioning trunk and hood, revealing storage space and a detailed big block 390 V8 engine with battery, hoses and air filter detailing.

The top of the car pops off and the doors open as well, showcasing the detailed tan interior with classic dark tan “leather” seats, radio, working steering and a mid-console gearshift (though it sadly doesn’t come with an ejector seat like the 10262 Aston Martin DB5 ).


The rear axle of the car can also be lifted for a more slanted angle for a more severe look. The back of the car features the “Grand Touring” GT emblem, brick-built tail lights and a variety of license plates to chose from.

The car certainly looks meaner with all the options attached, while still being recognizable an the iconic Mustang. Perhaps the only other more aggressive vehicle profile within the LEGO Creator Expert realm belongs to the red 10248 Ferrari F40 .

New elements in the set include 5-spoke rims for the tires and a longer 2×8 brick with bow. In terms of printed elements, the set comes with a 1×3 Mustang logo tile, a 2×4 bow with ‘GT’ emblem, and several striped tiles.

Jamie Berard, Design Lead on LEGO Creator Expert said, “The Ford Mustang is one of the most iconic, symbolic cars in history – and to bring this fan favorite muscle car to life in brick form, with this level of customization, has been exhilarating. We can’t wait to see our LEGO and Ford Mustang fans’ own creations when they get their hands on this new set.”

10265 Ford Mustang
Ages 16+. 1,471 pieces
US $149.99 | CA $199.99 | DE €129.99 | UK £119.99 | FR €139.99 | DK 1,199 DKK | AU $199.99
Build and customize your very own 1960s Ford Mustang!
Discover the magic of an iconic 1960s American muscle car with the LEGO Creator Ford Mustang, featuring dark-blue bodywork with white racing stripes, bonnet scoop, printed mustang grille badge, GT emblems and 5-spoke rims with road-gripping tires. Developed with input from Ford, this authentic replica comes with optional add-ons for customization, including a selection of license plates, supercharger, rear ducktail spoiler, beefy exhaust pipes, front chin spoiler and a nitrous oxide tank. You can even adjust the lift of the rear axle for an extra-mean look! Remove the roof panel or open the doors and you have access to the detailed interior with handsome seats, radio, working steering and a mid-console gearshift. Store items in the trunk or lift the hood to reveal a detailed big block 390 V8 engine with battery, hoses and air filter detailing. This advanced building set has been designed to provide a challenging and rewarding building experience full of nostalgia and makes a great centerpiece for the home or office. 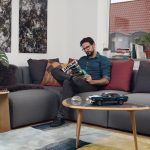