LEGO FORMA is the company’s first foray into crowdfunding. It is described as an “experience designed for adults looking for a fun and engaging way to reconnect with their creative side” . The LEGO FORMA crowdfunding exercise began in late September 2018, and finally shipped in January to UK supporters, with shipments to US supporters following up in mid-February after a brief delay from shipping issues.

During the campaign, the base setup cost $85 USD in the US Market and $88 USD in the UK Market, and included the box set 81000 with the default Koi Skin Pack, and 3 additional separately packaged skins. Fans could also take the less costly option of just getting the base pack (single Koi Skin Model) for $45 USD (US) $46 USD (UK) and additional skins at $15 USD (US) / $16 USD (UK) each. Now that the crowdfunding is completed, if you’re looking to pick one up, the only way currently is to turn to the secondary market such as Bricklink or eBay  where they’re already commanding a premium. Let’s do a quick dive into the details of this unique experience from LEGO.

Packaging and Instructions
Upon slicing the manufacturing seals, the box material reminds us of the quality used in the Lego IDEAS sets. Inside the box, we get 3 unnumbered bags, an instruction booklet, two pieces of prints of the Koi skins, and a thank you note from the LEGO FORMA team, acknowledging the support of the pilot project on the Indiegogo platform.


As mentioned, the Super Box level of the Indiegogo pledge also comes with 3 additional skins, each of which are packaged with thick cardboard that’s sized similar in width and length to the FORMA box. They are numbered sequentially 81001 for the Shark Skin, 81002 for the Splash Koi Skin, and 81003 for the Ink Koi skin.

The Build
Building the main mechanism is simple and quick. As with any Technic builds, I tend to double or triple check each step as I go along, since from past experience I know that even a slight misalignment can render mechanisms less than perfect and require tedious troubleshooting.

The whole setup, including parts with the crankshaft and gear placements, would eventually remain exposed in the finished build.

The completed mechanism box is encased in two technic 5×7 lift arms with the open center frames. Axle connectors are placed around the edges to attach the base for stability.

The stability brace goes all around the box in white round connectors.

The second layer of the brace is built with a smaller perimeter and at an elevated height.

Four Technic lift arms are then stacked on top of the mechanism. While the gears provide the movement, the angle and placement of these are where all the movement magic happens.

The base build is set aside for a moment while the body frame is put together.


The main bulk of the body is based on the same Technic 5×7 square lift arms used in the base mechanism.

Once the body is completed, the only remaining steps are the placement onto the base, supported by 3 long axles.

Placing the body on the mechanism is tricky, and this particular step needs to be exactly placed as depicted on page 46 of the instruction booklet, as evidenced by this diagram from the manual. Inserting it any other way will render the movement crippled.

At this stage, the build of the base and mechanism is complete. Here’s what the movement looks like before application of the skins. One thing I immediately felt was that the action of the crank is a two-handed action. Because of how light the model is, you’ll need at least two fingers to hold the brace down while the other hand turns the crank. Attempting to do it with one hand is futile and a struggle.

Skin placement
The Koi Skin comes default with the base set. It comes in two sheets that are sturdy yet flexible. While I can’t name the exact type of paper this is printed on, the best description I can give is a balance of high quality flexible and water-splash resistant paper laminated with plastic material. It will crease if you do a hard fold on it. One of the pieces of the sheet is printed on two sides, and the other is only printed on a single side.

The skin sheet contains macro perforations where it allows the skins to be separated from the frame simply by tearing along the dotted lines. The perforation tears do require some careful removal, and the best way I found to do it is to press the parts down onto a table or hard surface and pull up the areas that need to be separated. Some areas do require a tighter tug for release than others, especially curved areas.

I was surprised to discover a new part during the fixture of the skinning process – Technic pins which have a ridge and rounded edge. A quick comparison of other familiar pins side by side is shown below.


The pins are inserted into a rounded triangular hole in the skins. The skin fits in between the ridges and the caps of the pins.

Getting the pins into the rounded triangles can be tricky if you don’t want to damage the skin sheets. I would suggest doing it lightly and with care, and I would give the same advice goes for removing them. The image below shows how they are placed with the image on the left before the pins are pushed in, and on the right, after it’s been depressed in. You can see that the piece of skin has some room to wiggle.

Once they’re all in, the results is quite lovely. The parts where the skin wraps around the eyes of the fish do so with remarkable accuracy, and it’s quite delightful to see the koi come alive in such a satisfying way.

While most of the parts are symmetrical, the dorsal fin will show the exposed mechanism if the Koi is facing to the right, as in the image below.

Here’s the Koi swimming in action, it’s not exactly perfect and the movement is not as smooth, but it gets the job done.

Now let’s take a look at the other 3 skin packs individually and see how they compare with the default skin.
81001 Shark Skin
I was personally delighted to see the Shark Skin as an alternative look and wondered how it would eventually look up close in its final form.

Unwrapping the alternative skin pack, it was a surprise to see a packet of more of the new Technic pins, along with an instruction booklet.

Though the Shark is based on the same frame, there’s a slight difference in the placement of the headpiece and the fins, thus the cutouts and templates for the shark are different. Once again though, the skin consists of 2 sheets with 3 printed sides.

The pelvic and pectoral fins are reversed in direction, so a slight modification to the underlying model is required.


These are the 4 parts that will need to be reversed in direction for the shark fins to be attached as per the instructions. Not a difficult task, but easy to miss if you don’t pay attention to the details on the instructions.

The headpiece of the shark skin requires a tighter fit and a little more struggle to get it affixed.

As much as I had initial excitement when I first saw the release of the shark skin, the final result left me a little less enthusiastic. The color scheme isn’t very exciting, and perhaps I missed the mystery of the movement, which I’d already discovered with the application of the first Koi Skin placement.

The Shark in its animated form is as expected, somewhere between menacing and a tinge of cuteness.

81002 Splash Koi Skin
The splash koi skin is a unique take on bringing a different feel to the same build of the Koi.

It comes with the same formula of 2 skin leaflets and a pack of special Technic pins. 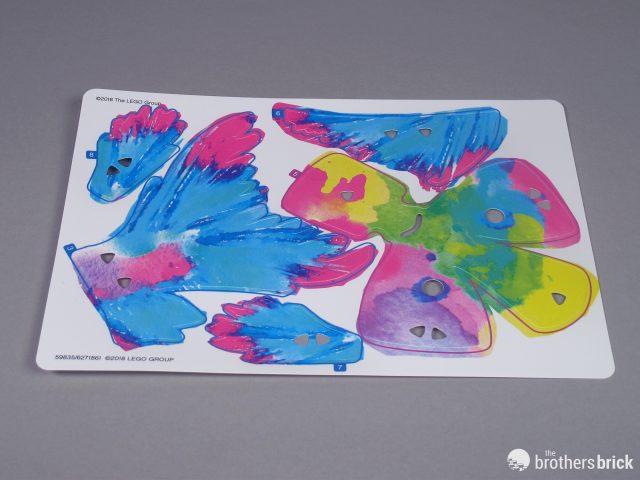