In the world of Star Wars, there are a few fan-favorite vehicles that have stood the test of time, and the Snowspeeder is definitely one of them. They’re sometimes referenced as airspeeders since they were originally utility vehicles until they were modified by the Rebel Alliance for the snowy landscape and battle as seen in Star Wars: Empire Strikes Back , and LEGO’s newest version is 75259 Snowspeeder – 20th Anniversary Edition .

To date, there have only been 3 other snowspeeders at this scale sold in individual sets in the 20 years of the LEGO Star Wars lifespan (plus one cousin, the Sandspeeder ). Of course, then there are the other snowspeeders that appeared as part of larger playsets, which include the 7666 Hoth Rebel Base , 8089 Hoth Wampa Cave , 75014 Battle for Hoth , and finally the 75098 Assault on Hoth . Lastly, most fans will remember the Ultimate Collector Series versions which range over a thousand pieces and are masterpieces on their own, plus several tiny microscale versions. Without further ado, let’s take a look at this special commemorative edition the snowspeeder, which LEGO has released as one of five sets in celebration of two decades of Star Wars LEGO. 75259 Snowspeeder – 20th Anniversary Edition has 309 pieces and is priced at USD 39.99 | GBP 34.99  | CAD 49.99 . It is currently available in stores and online.

The Box, Packaging, and Instructions
The box art shares the nostalgic visual theme of Classic Star Wars from the 90s that we saw in our review of the 75243 Slave I – 20th Anniversary Edition . The front of the box showcases the exclusive Lando Calrissian 20th Anniversary minifigure, while the back of the box has a throwback to the very first snowspeeder, which was released in the year 2000 under the set number of 7130.


This set comes in 4 numbered bags, with a printed instruction booklet and a sticker sheet.

The unique part of the instruction booklet is in the first few pages. The first spread is an introduction of the LEGO Star Wars franchise as it began 2 decades ago. The second spread is a comparison of the first snowspeeder to today’s 20th Anniversary Edition.

The third spread introduces Lando Calrissian with a short biography, along with the exclusive minifigures that are attached to each of the 20th Anniversary Edition sets in this wave. The final spread before the instructions begin is a short synopsis of how the Snowspeeder made its first appearance in the Star Wars Galaxy.

The Build
The build starts off with a simple build of the Rebels’ standard 1.4 FD P-Tower. Unlike the other P-Towers in sets where snowspeeders were bundled with them (these include the 4500 and 7130 Snowspeeder sets), this has an in-built stud-shooter . I’m not a fan of these small side builds, but they do add some play value to the set for younger fans.

Next up is the start of the main body and it isn’t overly complex. There is little mystery to how the build will proceed, as the hinges on both sides are a giveaway to where the side wings would fit in, with the four 4×1 slopes providing support.


The sticker placements give some character to the tiny and plain build. They are placed at the armor plate at the nose of the snowspeeder, the internals rear dashboard for targeting, and the back of the canopy build. I liked the details of the snow mountains on the targeting sticker – just giving it a dash of detail that’s a neat touch for movie accuracy.

At this stage where the canopy is placed and the body completed, this reminds me vaguely of Wet Nellie , the James Bond’s submersible Lotus Esprit.

The wings start off with a flat build of plates, and eventually the shooters are placed on the underside. In movie-reality, snowspeeders are left almost undecorated with a clean surface below to keep a smooth airflow. The shooters are for play purposes and I think they are hidden well from a normal angle of sight.


Additional stickers are placed underneath the air-brake flaps, on the fuel tank area (at the rear), and at the power coupling/laser activator slopes (middle).

One would assume that the opposite wing build would be an identical and symmetrical build to the first wing, however, a slight difference is the orange 1×2 plate sitting below a slope with 4 slots . Perhaps I’m not a huge enough fan of the snowspeeder to know the purpose or function of that slight difference but it does exist on the 75144 UCS Snowspeeder as well.

The remaining parts from bag four are the harpoons and tow cable.

The completed model
The completed build isn’t really spectacular, but I would say decent it’s enough. There are only so many ways you can re-build a vehicle at this scale and shape. You can compare it to the other two recent snowspeeders and find that the base construct won’t be too far off in terms of styling and shaping. What I would say is that the stickers did add a lot more to the finished look.


The Minifigures
Four minifigures come with this set, including the special 20th Anniversary Lando Calrissian. The first figure is a Hoth Rebel Trooper. The torso print seems to be new, though it will be issued in various other upcoming 2019 sets.

He stands guard beside the P-Tower as any loyal trooper would do, and looks quite nice paired together with this for play.

Two pilots, Luke Skywalker and Dak Ralter are featured as pilot and gunner in this set. Both have the same torso and leg prints, and Luke has his lightsaber as an additional accessory.

Luke alternate face is a print with his visor up, which is barely visible with his helmet piece on.


Dak has two face prints and both of them has the visor down. One has a wide smile and the other an open-mouth shocked expression with raised eyebrows.

Both pilots fit quite snugly into their seats at a sloped angle. 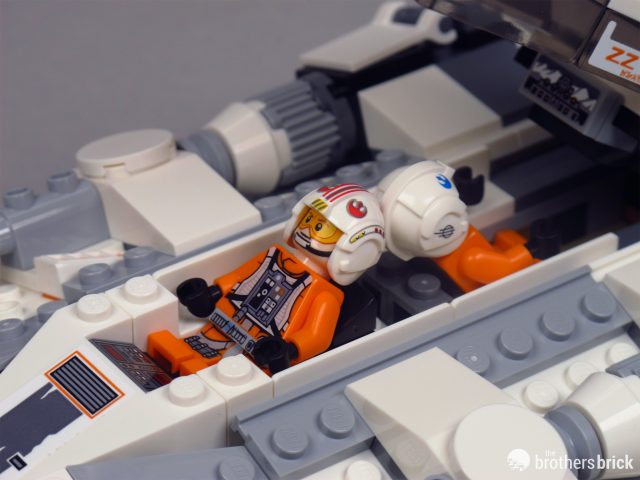