While many don’t fancy the Star Wars prequels, I for one am a fan them, especially the Podracers from The Phantom Menace . Thanks to the 20th Anniversary of LEGO Star Wars, we get an Anakin’s Podracer to commemorate some of the iconic themes and sets from two decades ago. 75258 Anakin’s Podracer – 20th Anniversary Edition comes with 279 pieces and retails for US: $29.99 | Canada: 39.99 CAD | UK: £24.99 . It is currently available.


The Box, Packaging, and Instructions
Unless I’ve terribly missed something during my hiatus from LEGO in the late 2000s, this build of Anakin’s Podracer is the most detailed to date. The 1999 issue of 7131 Anakin’s Podracer consisted of only 134 pieces, and the 7962 version which contains both Sebulba’s and Anakin’s Podracers , is not as complex of a build and design as this new issue. We won’t even talk about the abomination that was the Podracing Bucket . So this is actually the first time since 1999 for Anakin’s Podracer to be released as a standalone set, and it’s the most accurate yet.


It comes in 3 numbered bags, along with 2 loose pieces of outer cable with a length of 208mm, a sticker leaflet, and an instruction booklet.


The instruction booklet has a bit of a background of the first ever Podracer and a few highlights of this Anniversary Edition highlighting its more screen accurate features. The next few pages show off the 5 exclusive figures that come with each of the 20th-anniversary sets. There’s also a quick throwback to the Boonta Eve Classic Podrace where we see Anakin race for the first time ever in the racer this set is based on.


The Build
The build starts off with the construction of the pod where Anakin is seated pilot. Almost immediately, the stickers which depict the motifs of the pod are placed. After all, this is part of what makes Anakin’s pod racer unique, and it would simply look dull without them.

The throttle levers are placed and the cockpit starts to take the aerodynamic shape of Anakin’s Podracer. More stickers are placed on the sides of the pod. The undersides of the pod are four robotic arms which will eventually be connected to flexible hoses leading to the pod engines.


There’s no way that the Podracer would be able to support itself for display, necessitating once again a support mechanism made from Technic beams and pins. The usage of the transparent Technic beam and liftearms makes the perfect stand for keeping the support system as invisible as possible.

I wouldn’t claim the engine build is movie accurate but it is a decent attempt to create complexity around a futuristic cylindrical engine.


Stickers are placed at the tips of the triple air scoops. There’s a repeated build for the second and identical engine and with that done, the only part that remains is to secure the pod and engines to the frame, and a final bit to connect the pods to the engines.

The Podracer’s Steelton control cables (played here by LEGO flex tubes) are attached to the pod and the engines.


The end result of the entire build is a futuristic hot rod, and the flexible hoses are just a little long, which is perfect to give it a good bend as in the movies.

One of my favorite parts is the electrical arc between the two engines. It’s depicted in this build using the electric zig-zag , which has only appeared in a few colors before but now is in transparent pink.

The Minifigures
This set comes with 3 minifgures included in the exclusive 20th Anniversary Luke Skywalker. Let’s take a look at each one of them in detail. Right off the bat, it’s nice to see the teenage legs (medium-length bendable legs) pieces being used for Padme Amidala.

Young Anakin wields a spanner accessory and sports an aviator cap. He has a smiley face with freckles and an annoyed look as his alternate expression. His torso is similar to the original first-issued Anakin for the Podracer set, but is printed on both sides. The prints are new with added details.


Padme Amidala has the new medium legs and she wields a blaster. The torso print is also quite similar in design concept to the 1999 issue of Anakin’s Podracer, but with an updated and more detailed printed on both sides.

Her hairpiece is a new and detailed piece running down to her waist and hiding the print at the back of the torso. She has an alternate faceprint with a disgusted look, as opposed to her default smiling face with a dimple.
As with the other 20th Anniversary sets, the exclusive minifigure has no relation to the rest of the set. This one features Luke in a pilot uniform which first appeared in 1999 in both the 7130 Snowspeeder and the 7140 X-Wing Fighter . He has a helmet and a lightsaber as accessories, though the lightsaber hilt is merely painted silver instead of true chrome like the original.
The back of the torso is printed with the 20 Years of LEGO Star Wars.

Summary
As a fan of podracers, this build did not disappoint. The best part about re-releases of Star Wars vehicles is that they benefit in terms of accuracy from the new parts issued. And even though sometimes they are subtle and minor changes, the outcome makes a huge difference. There are enough unique and new parts in this set to make it a refreshing build of a vehicle that’s not been repeated very often over the theme’s tenure. Over and above, both Anakin and Amidala are new prints which warrant a buy for minifigure collectors. For the rest of us, the exclusive classic Luke may be a good enough reason. 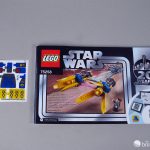