Last year Bricklink hosted its first AFOL Designer Program (ADP) , a grand effort to make fan designs come alive and be available for purchase. If you’re unfamiliar with Bricklink, it’s an Amazon-like marketplace for purchasing current and discontinued LEGO products. This includes the sale of individual LEGO bricks for restoring sets or making original models known by many fans as My-Own-Creations, or MOCs for short. The Brothers Brick features fan-designed creations every day, and we often receive questions regarding instructions or if they can be purchased. While ready-made MOC kits are not a new concept, where Bricklink’s ADP program shines is in how it took the needed time to solicit builds from the community and used a Kickstarter-like system for fans to determine which sets would be produced for purchase. Best of all, the program received the endorsement from the LEGO Group.

As of now, all of the sets have been selected and are slated to ship this month to the proud supporters who funded them. Bricklink has provided an early copy of the Wild West Saloon by Jonas Kramm (aka Legopard) to the Brothers Brick. When it comes to the number of supporters, this design ranked second to the Löwenstein Castle we recently reviewed. This set comes with 1496 parts, is priced at US $149.99 before shipping, and does not come with any minifigures.

The box, instructions, and contents
The set sent to us is an early copy, so it arrived in a generic brown box with elements in zip-lock bags instead of the finalized packaging. Elements may not have been sorted the way they might be in an official set, but I do have to say that I’m impressed with the how the BrickLink team packaged them for easy searching throughout the build. Parts are sorted by sizes and shapes that make sense for the build, with larger plates going into a single bag and each subsequent bag consisting of smaller size elements. In a way, it’s almost the way a typical LEGO fan might sort out parts for future LEGO projects. Without having to hunt far and wide for pieces, the folks at Bricklink have made the building experience easier and more enjoyable. Everything was packaged in a total of 16 zip-lock bags, including 12 larger bags and 4 bags for smaller elements. The set also comes with a 32×32 tan baseplate. Although not explicitly stated, I would advise the builder to empty each bag into a single container for the two stages. Bags labeled A form the first floor, and the B bags are primarily for the upper floor and exterior detailing.


The instruction book is an early copy and, from what we gather, the final version will be different form what you see here. Regarding the building experience, however, I can say it’s likely that the layout and contents printed have been finalized. With each and every step, I’m particularly impressed by the level of quality in relation to the building experience. I shall refrain from sharing any detailed pictures of the pages, since things may change and might not be a good representation of the actual end product. I’ve had my fair share of buying instructions for custom creations online, and I dare say this is one of the better ones out there in terms of thought put into it. The best kind of instructions are seldom talked about because it becomes a transparent experience of giving a good flow to the build. I believe this meets those standards.
Disclaimer: This set comes with no minifigures. If you see any during a quick scroll of this review, these are figures that I used from my stash to give the saloon a little more life.
The parts
The one thing that did frighten me was the color scheme and the associated work ahead of picking out parts. Most of the elements are in shades of brown, and staring at the dozen or so bags of varying degrees of brown did intimidate me a little. Throughout the majority of the build, the most common colors were dark tan, reddish brown and dark brown. Dark tan is easy to distinguish, and brown elements look distinct enough on sight, but the ultimate task is to match these to the print colors of the instructions.

Interpreting dark tan was not a problem. For the browns, I did like and appreciate this handy guide for differentiating the two colors and how examples were strategically placed throughout the instructions when needed. Fair warning, though; it will still be hard to distinguish the colors, but you will get a hang of the subtle difference once you get through a couple of bags. While using the instructions, I would recommend working in a well-lit area.


The build
The build starts off with the foundations of the building and the outlines of the perimeter where the boundaries and walls come together. There are a few random odd and ends strewn outside the perimeter for greebling and functionality.

If there was one step in the build that I would deem the toughest and most eye-straining part, this is it. It does come with a benefit though; if you recall the color coding guidance between the reddish brown and dark brown mentioned earlier, this will give you sufficient “eye training” that will last throughout the build in telling the two colors apart from one another. While building I felt somewhat tempted to cheat and lay the tiles and plates randomly. Having said that, everything has its purpose and place with any LEGO build, so extra care was taken to get everything right.

Once the floor is completed, the vertical build starts with the structural beams for support and windows.

For me at least, the part that gave me the vibes of a western theme was the faux wooden paneling of the walls with the dark tan tiles.

The walls consist of a simple yet effective technique of layering the tiles in a staircase-like pattern, which is then finished off with clips, rods and headlight bricks that will aid in mounting and structural support later on.

As the walls rise behind the angled staircase leading to the entrance, the Western saloon theme starts to come alive.

What’s a saloon without shutter swinging doors? I’m not sure about the color scheme one would typically see in a western saloon, but I do think the choice of blue doors and window frames gives the place a bit of a character and charm. If there’s one thing that left me disappointed, it was these doors – they are mainly decorative and do not move easily. There are only 3 studs holding the structure in place (each side of the door), and they do come off with a bit of a push. Therefore, if you’re planning to keep the doors of the saloon open, it’s best to do so during this phase of the build.

The next leg of the build focuses on the interior, beginning with a cupboard built behind the bar that’s affixed to the base built early on. It is decorated with varying shapes of liquor bottles for the saloon’s plastic patrons. A furnace with pipes running through the wall is supported by two cleverly placed golden frogs as legs.

More decorative elements fill the floor with a very pretty looking piano. It’s placed to the right of the entrance and behind the staircase. While I initially felt it was a sad place to hide such a clever build, it does work well considering the constraints on space.

I would consider the Piano one of the few smaller builds that are movable within the first floor. It’s held in place by a single stud. The chair itself is secured to the floor with 4 studs on the base. The two studs seen on the seat indicate it’s a perfect place for a minifigure piano player.

The staircase is supported by a beam and also secured to the top of the window built in the early stages. Everything here is made with strength and sturdiness in mind.

A bar counter is then retrofitted with two beams on each side, which in turn starts to give shape to the second level. A further touch of detailing is added with a lamp on the far left structural beam.

The final addition to this level are a table and two chairs securely fastened to the floor. Besides the piano, these are the only other smaller builds that are exposed and easily removed.

The completed first floor is a delightful scene with tiny details that add up elegantly to what you might expect to see in a western saloon.

There was a hint of sadness when I started to layer the base of what was to become the second floor. It started to shield and overshadow some of the intricate detailing of the piano and bar. It also evoked a sinister feeling of a dark-lit entrance at the saloon doors.

A quick spin of the model brings us back to the front entrance where it’s further detailed with structural support and a roof. The results of these steps provide the saloon with a completed floor for the next level.

The vertical build begins with the structure of the balcony and a similar construct for the walls that were made on the first level. Besides the swinging saloon doors, the only other structurally unsound area is the balcony. It did give way more than once during the build. Due to how it’s angled, there are only two studs at the base of the beams that have clutch power. The floor of the balcony rests without studs securing the build. This shouldn’t cause as many issues later on, as the walls and roofing will provide the stability needed. My advice is to be more light-fingered during the construction of this area.

The saloon looks marvelous with all of the walls standing.

With the outer walls finished, the detailing of the second level’s interior starts with bright red curtains on both windows and structural beams and railings made from telescope elements that run across a curved design down to the entrance of the balcony and to the staircase. These curves, including the overhead beams, add to the elegance and architectural style that make this a wonderful design to admire.

The final steps for the second floor lay out the roofing. A removable top allows for playability and better lighting. The top is also placed down without any studs securing it in place.


If you’ve not already noticed a detail that’s one of my favorites, the chandelier that hangs down from one of the curved tiles simply takes the cake! This practically completes the interior detailing of the saloon.

The final bits of building that are left are the porch’s awnings walkways. Once the beams are built, the awnings are snapped into place with clips and bars within the walls, giving it a very smooth and complete look. The beams are mainly there for aesthetics and don’t really provide any real structural support but do support the sloping angle of the roofline.


All that’s left are the accessories surrounding the saloon, including a water trough, hitching rail for the horses, and what looks like a feeding bag. 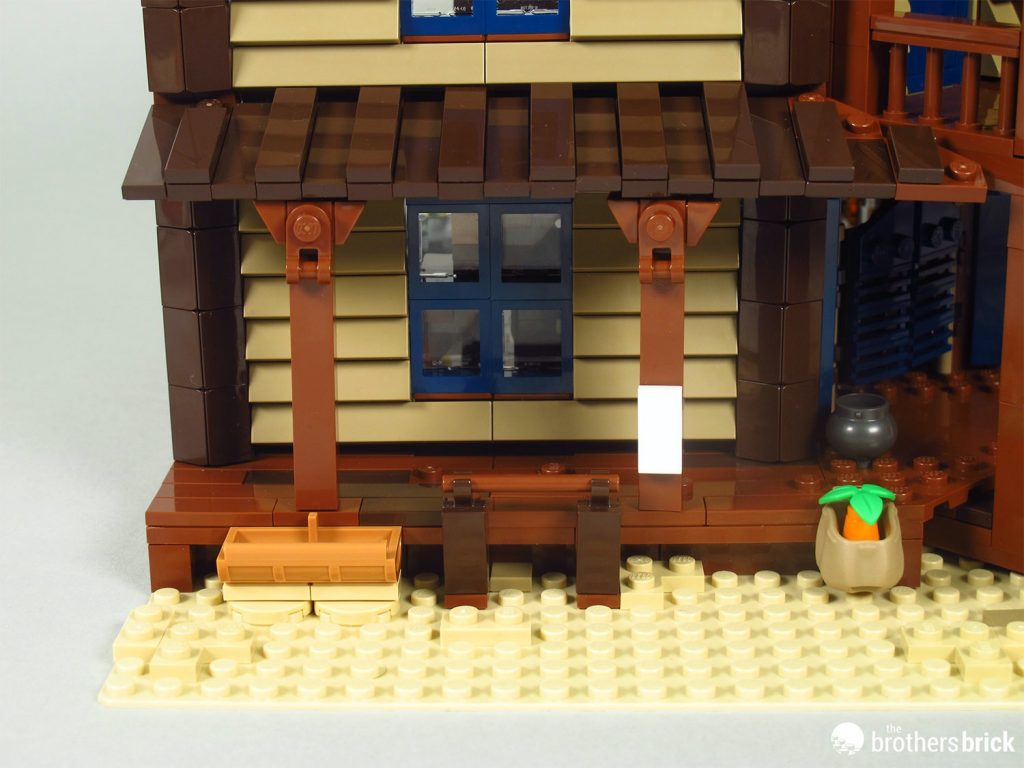