The Disney+ exclusive TV show The Mandalorian just debuted, so we’re taking a look at the single LEGO Star Wars set released to support the show so far. Although the TV show didn’t debut until November 12th, 75254 AT-ST Raider was released alongside the first wave of LEGO Star Wars sets from The Rise of Skywalker at the beginning of October. The set includes 540 pieces with four minifigures and retails for $49.99 US | $69.99 CAN | £49.99 UK (it’s also available at 20% off from Amazon.com right now as well).

This latest AT-ST is one in a long line of “chicken walkers” that LEGO has released, following up on the 75153 AT-ST Walker from Rogue One released in 2016. Of course, that doesn’t count the utterly awful half-walker pawned off on LEGO Star Wars fans in the form of 75201 First Order AT-ST (arguably the worst LEGO Star Wars set ever).
Note about spoilers: Unlike the abominable First Order AT-ST released well in advance of The Last Jedi , this LEGO Star Wars AT-ST does not reveal any spoilers about the TV show. Out of respect for readers who have not yet seen the show (or can’t due to regional release differences), this review of the set will also avoid spoilers. We ask that commenters respect each other and do the same.

The box, packaging, & sticker sheet
Unlike most LEGO sets, the box for this AT-ST is vertically oriented, showing similar action shots of the walker on the front and back, with play features showcased on the back.


The set includes only four numbered bags, with the instruction booklet and sticker sheet loose in the bag.

The requisite sticker sheet provides striped designs as well as technical details, and would work quite well on custom post-apocalyptic LEGO creations.

The build
The basic mechanism for turning the head on this latest AT-ST is identical to the mechanism used in the 2016 version. However, a major difference between the two versions becomes evident in the very first bag — the body for the 2016 version was built on a 6×6 plate as the base, while the new version is built on a 6×8 plate. The longer platform behind the head sports some nice greebling

By the end of the first bag, the body of the body is complete, with a knob in back to turn the head using the Technic gear mechanism.

The core of the body comes together with the second bag, using the same structure as the 2016 version, albeit with different details (such as a blaster in place of the thermal detonator).

The head attaches securely to the “neck” of the body thanks to the Technic axle that extends up from the body. Meanwhile, a T-shaped Technic beam holds what would be a fairly fragile rear section behind the pilot’s seat together securely (again, using the same technique as the version three years ago).

The walker’s legs come together in the third bag, showing a very different visual design from the 2016 version thanks to the different colors and stickers, although the structure itself is again essentially identical. Interestingly, the struts are assembled very differently, even though they’re completely identical. In the 2016 version, the strut is attached to both tow ball pieces in a single step, with the inverted “baby bow” stabilizing the piece in the next step. In the 2019 version, the same end result is achieved by attaching the baby bow piece to the 1×2 with tow ball first, and then swinging the assembly up to connect with the back side of the leg. I’d be curious to learn why LEGO instruction booklet designers would make a change like this, since I can’t think of why one approach is better than another.

The fourth and final bag provides the parts for the head’s outer armor. Although the shape is identical to the 2016 edition (so it will fit on the identical core), both the structure and the surface detailing are different on each panel.

The finished model
We don’t think it’s a spoiler to reveal that this AT-ST does not appear in the first episode. (If you disagree, we apologize.) Unfortunately, this means that it’s not possible to render judgment regarding how well the LEGO set matches the “real thing” shown on screen. However, we can certainly compare it to non-LEGO models, which we can safely assume are also based on the same source material.

Overall, the model is largely a color-swapped re-skin of the Rogue One AT-ST (especially structurally), but several key details stand out, such as the loose wires made from a black whip accessory on the left leg. However, based on the other collectibles, this is a black net, not loose wires. Perhaps a misinterpretation by the LEGO designers based on early reference images?

The striping on the legs is indeed striking, giving the raider a threatening look that sets it apart from the rather (let’s just admit it) ridiculous look of the all-gray Imperial walkers.

The head also features stripes, with white stripes on light gray tiles. These are inset among dark gray plates, which kind of overwhelm the stripes. The more rounded weapon pods are a decided improvement over the large conical pieces used on the previous AT-ST.

The knob on the back turns the head nicely, without destabilizing the standing walker.

Just like in Return of the Jedi on the Forest Moon of Endor, the top hatch opens.

The entire top of the walker’s head opens so you can place the minifig driver. Despite the large size (arguably too tall), only one minifig fits in the cockpit.

The extra space behind the head allows for extra detail, featuring some great greebling in black inset within the brown.

Specifically comparing the 2016 and 2019 walkers, it’s clear that they share the same basic structure while having a radically different surface design. The new version looks like a post-apocalyptic version of the classic Imperial AT-ST.

The side view reveals an a surprising number of structural differences, starting with the extended body behind the head and a new strut between the upper leg and the body. The new version also has longer forward twin blasters and smaller, more rounded pods for the weapons on either side of the head.

A rear view also highlights the improved rear deck and the addition of a round 2×2 tile on the knob.

Even though the coloring and surface detailing are different, the smoother surface of the new version is a decided improvement that we can hope will be reflected in a future “normal” AT-ST walker.

The minifigures
The four minifigs included in 75254 AT-ST Raider are the Mandalorian himself, Cara Dune, and two Klatooinian raiders. Like the AT-ST itself, Cara Dune does not appear in the first episode, though she has been revealed in trailers and via a brief character biography on StarWars.com .

The Mandalorian wears a gunmetal version of the standard Mando helmet, with an accurate representation of his armor on the minifig’s torso and legs. Pauldrons are hard to represent without a separate armor piece, which LEGO does sometimes as neck accessories — one of the raiders in this very set is wearing a spiky pauldron, in fact. But LEGO has never given Mandalorian armor separate pauldrons, and this minifig is consistent with his Fett predecessors, even though his right pauldron features as a minor plot point in the first episode. Cara Dune wears armor over a dark blue outfit, but we’ll have to compare in more detail after we see more of the character in future episodes.

Cara has a reversible head so she can alternate between wise-cracking and fierce.

Cloth capes are rarely noteworthy, but the Mandalorian’s cape is narrower than the standard flared capes seen on Harry Potter and LEGO Castle minifigs over the past 20 years. It works much better, and we can hope the shape sees usage on other minifigs. Not surprisingly for a “mystery” character, the Mandalorian has a blank black head, like Captain Phasma and other minifigs whose face is never fully revealed.

The Mandalorian’s detailed torso design extends to his back, even though it’s obscured under the cape.

Although the Klatooinians have the same heads and legs, the torsos are different. The shared aesthetic gives them a unified look that indicates faction affiliation.

Belts and sashes extend to the back of the torsos, with subtle details like rough stitching.

SPOILER WARNING: One comment regarding minifig selection seems worth a minor spoiler (with an ALL-CAPS warning). I’ve never been a fan of the IG-series droid minifigs, but this would have been a fantastic set in which to include one. Who knew they could do…all that?! IG-11 may actually redeem IG-88’s useless metal ass.

Conclusions & recommendation
75254 AT-ST Raider released to support The Mandalorian uses a substantially identical structure to the 2016 AT-ST from Rogue One , featuring a radically different look that we’ll have to wait to see in action on the show. It’s a fun model with cool play features, even though I’d still love to see a walker that can, well, walk.

The LEGO Star Wars sets for Rogue One were a downright steal — especially when they went on fairly deep discount after the marketing and promotion surrounding the movie had faded. (I rarely buy multiple copies of LEGO sets, but I bought three copies of the stellar 75172 Y-wing .) It remains to be seen what, if any, discount this set will receive (beyond the 20% it’s already been discounted on Amazon), but the base price of $50 for 540 pieces is $10 higher than the price for the older version at $40 for 449 pieces and three minifigs. Regardless, accounting for the extra parts and minifig plus a bit of inflation, the price is fairly equivalent.
But let’s be honest with ourselves. As cool as the re-colored raider AT-ST might be, most of us will probably buy the set just for the Mandalorian minifig. It’s undeniably the star of the set, but I’ve always loved Klatooinians, so more is never a bad thing in my book.

We can hope that LEGO will release a set featuring the Mandalorian’s ship, but in the meantime, this is a fun set — and the only way to get the Mandalorian minifig for now.
(Again, let’s keep the comments spoiler free.)

Read all our reviews of the Q4 2019 wave of LEGO Star Wars sets: 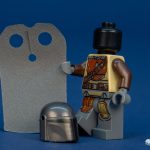