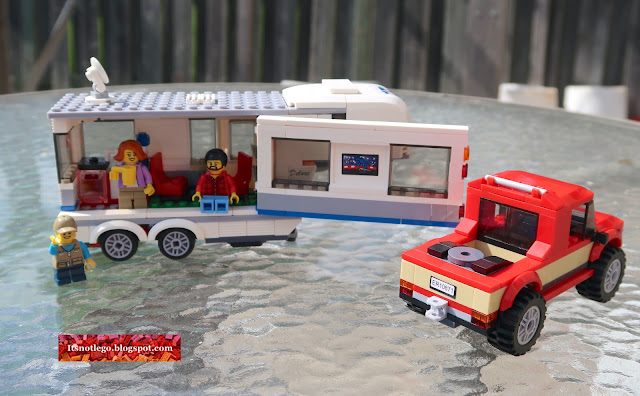 Hey brick fans, here's a cheap set I found on Aliexpress back in December 2021, but just got around to building it now.  It's the Bela/Lari Pickup and Caravan set 10871, which is a near perfect knock off of Lego 60182.  Now that the chinese brick companies are starting to design and develop their own sets, these old clone sets are getting harder and harder to find.  Anyways, let's start the review! In the past, this Lego copy has previously been cloned by Lepin and Sheng Yuan as well.  This latest clone by Bela has 344 pieces and comes with one instruction manual, one sticker sheet and three reproduction minifigures.   My set came wrapped in the standard white plastic bag and inside there are seven bags of parts. Here's the sticker sheet.  Check out the license plates that use the Bela set numbers instead of the Lego set numbers. This being such a small set, I just opted to rip open all the bags and dump them together. Here's all the parts that make up the mini figures and their accessories, separated from the rest of the bricks. You can judge for yourself on whether you think the quality of the mini figures is on par with the original Lego versions.  The torso and face prints are pretty decent, imo. So typical of the knock off sets are the scratched transparent pieces, and this set was no exception.  Hard to tell from the pictures, but yes, the windows are scuffed. Instructions are clear and easy to follow.  Aside from the window pieces, the other bricks are good quality.  I encountered one or two bricks that had less than adequate clutch, but once assembled together, the pieces were solid. Here's the pickup truck, looks to me like a ford F150.  I feel like it could have been improved by adding opening doors, seats inside the cabin, and maybe some offroad lighting on the roof. Here's the caravan section under assembly.  There appears to be an oven, a cabinet with coffee maker, a table and two chairs that can swivel.  His and her mugs complete the interior accessories. Can you tell that the Mr and Mrs are ready for a road trip? Only one problem though, you might be able to squeeze two people into the overhead bed, but there are three mini figures in the set.  Where is the third person supposed to sleep?  May be the two swivel chairs could be replaced by some custom chairs that can lay flat? Most caravans have a small washroom, but the Lego designers decided to omit it on this set.  I think that they could have easily extended the caravan by about 6 studs to put a washroom in it. The completed pickup and caravan set complete with all the accessories, including a sailboat, a propane tank and frying pan, with crab and fish.  You also get a net and a camera. The pickup truck has a trailer hitch in addition to the fifth wheel.  It could probably be used to tow boats or dirt bikes and such. The dual axle caravan can be parked on it's own, when the pickup has to go get gas or buy groceries. The normal way to get into the caravan is via the door.  It has a handy step rail to make it easier to get in. The top canopy can be removed to access the sleeping quarters. The other side of the caravan opens up to allow playability.  There's a sticker that's supposed to represent a TV.  To get the TV signals, there's a satellite dish on the roof. It's time to leave the campground.  Here's a first, I actually used the stickers that came with the set.  Makes the caravan look more authentic, although I still suck at sticker application, as evidenced by the crooked license plate. For my review, I will give this set 4.5 stars out of 5.  It loses half a point because of the scuffed windows and a couple of minor brick clutch issues.  No extra parts in this set. Fully worth the little bit of money I spent for this set, though. If you are interested in getting this set off Aliexpress, you can use this link to search for the original Lego set code 60182 or you can try this link to search for the Bela 10871 set code.  In either case, the links should let you find the Bela 10871 pickup and caravan set on Aliexpress.Here are the Lego stats from Brick Economy.  Set 60182 was released in 2018 and retired in February 2020.  The average price of a new set goes for approx $80 USD.And this is what I paid for Bela 10871, the knockoff version of this set. Hope you've enjoyed this review.  Feel free to let me know what you think of this set in the comments below.  Thanks and see you in the next post!